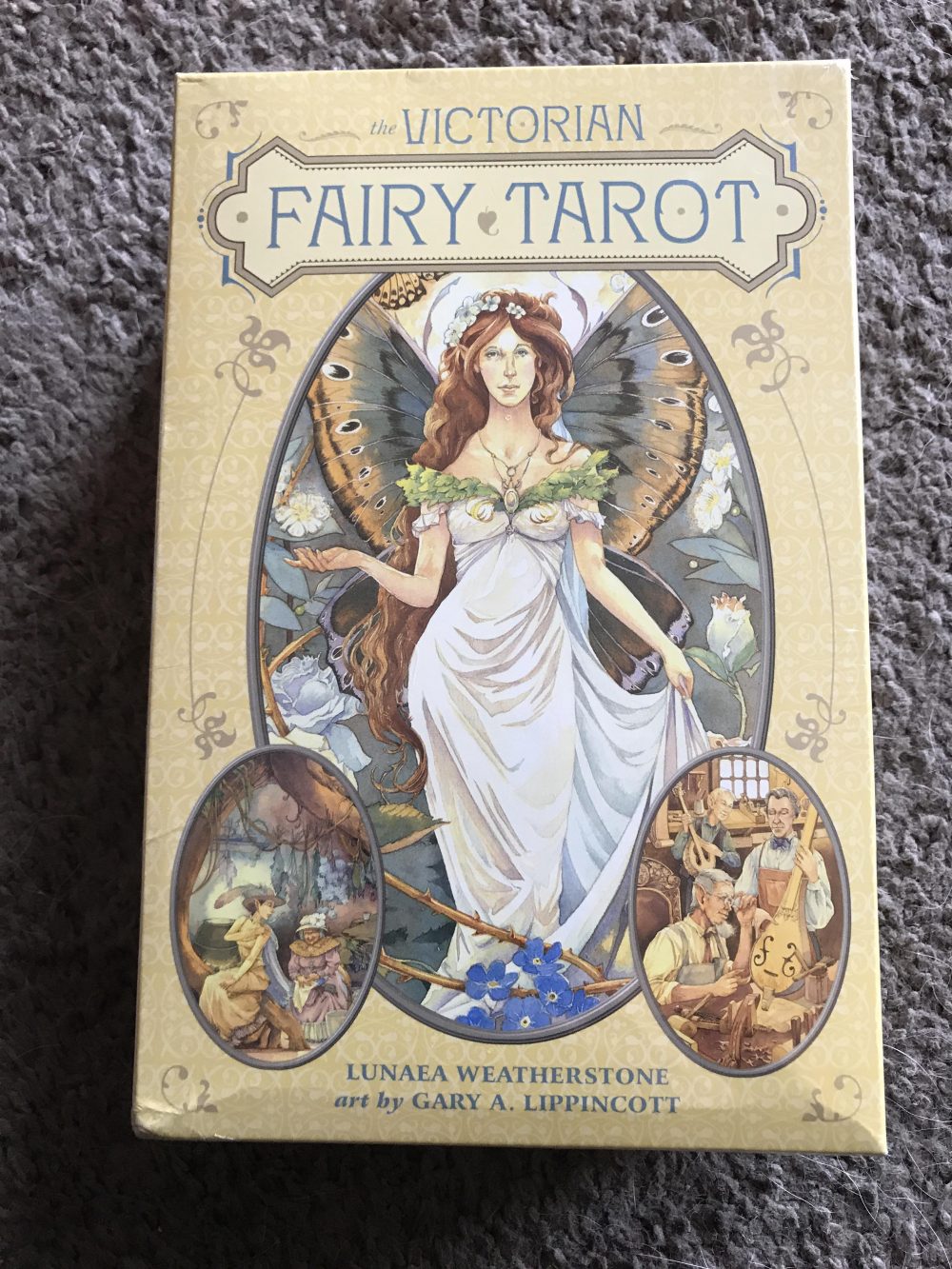 The Victorian Fairy Tarot combines the romance and elegance of the Victorian era, mystical fairy imagery, and the wisdom of tarot. Guiding your journey is an in-depth book that shares fairy lore, explains each card, and teaches you how to interpret them. This beautifully crafted, Rider-Waite-based tarot is ideal for new or experienced tarot readers.

Lunaea Weatherstone (Portland, Oregon) is a priestess, writer, teacher, and tarot counsellor who has been serving the Pagan community for more than twenty-five years, since her days as owner/editor of SageWoman magazine. As Grove Mother for the Sisterhood of the Silver Branch, she offers year-long programs in goddess spirituality. Lunaea has been working with the tarot for more than forty years.

Gary A. Lippincott (Petersham, Massachusetts) has won numerous awards for his fantasy art, which is in many collections worldwide. Books he has illustrated include Bruce Colville’s Jeremy Thatcher, Dragon Hatcher and Jane Yolen’s Come to the Fairy Ball, and his cover art has graced works by such authors as Ursula K. Le Guin, J.R.R. Tolkien, Tanith Lee, and Charles DeLint.

From a Hall of Fame Amazon reviewer!

Janet Boyer HALL OF FAME 5.0 out of 5 stars
Stunning! One of the Best Decks Extant.

“Victorian science would have left the world hard and clean and bare, like a landscape in the moon; but this science is in truth but a little light in the darkness, and outside that limited circle of definite knowledge we see the loom and shadow of gigantic and fantastic possibilities around us…” – Sir Arthur Conan Doyle in The Coming of the Fairies

With its borderless imagery, unique title font and extraordinary watercolor art by Gary A. Lippincott, there’s a lot to love about the Victorian Fairy Tarot (companion book by Lunaea Weatherstone).

Although they feature pointy ears and wings, the fairies in this deck display all-too human situations, tools, garb and backdrops, making this an accessible set of cards for all users.

Vic Fairy BonusSave for the Six of Winter depicting a fleeing family gliding downriver on a swan and the Nine of Winter showing a worried fairy sitting up in bed, the Victorian Fairy Tarot is (blessedly) without Rider-Waite-Smith iconography. Yet, the cards skillfully depict what the cards usually mean—with some additional thought-provoking touches (many highlighted by Weatherstone’s engaging commentary).

For example, stocked with fragrant perfumes, glittering jewels, fine fabrics, enticing elixirs and luscious fruits, The Goblin Market (The Devil) portrays the trap of materialism. Yet Weatherstone elaborates that not only are the Goblin’s wares mere temptations, but also illusive, damaging and addictive. Once bought, used or consumed, the gems turn into rough pebbles, the garments burn the skin and the fruits create more hunger. “You should have looked before you bought!” croons the Goblin.

Speaking of The Goblin Market serving as The Devil card, here are the other re-named cards in the Victorian Fairy Tarot:

The Minor Arcana suits are divided according to the four seasons:

I was pleased to see this particular demarcation since these are the personal seasonal associations I ascribe to the four suits. Even though the suits are assigned to a season, it doesn’t mean that the cards are set outdoors with obvious accoutrements (i.e. snow for winter, flower-filled fields for summer, etc.)

In fact, one of the most brilliant cards in the Victorian Fairy Tarot is the Three of Winter (aka the 3 of Swords). At a fairy theater, a couple performs a dramatic scene on the distant stage. In the foreground, three women (of course) whisper behind unfurled fans, not even looking at the production.

We could deduce “gossip” as an obvious meaning for the card, but Weatherstone gives us much more to think about:

“Some elegant fairy ladies are finding the intrigue in the audience as riveting as the scene onstage. With little to occupy them during the long winter months, gossip is a favorite pastime, and their opinions are not always kind. Small offenses are magnified, little lapses of judgment are thrown into high relief, and everyone minds everyone else’s business far better than they mind their own. There are real tragedies, to be sure, but exaggerated melodrama serves as well for petty minds and chilly hearts…Workplace intrigue is particularly insidious, as it can cause real damage to livelihood and reputation.”

What a fantastic re-casting of the traditional 3 of Swords card! (Personally, I’d ascribe this type of interpretation to the 3 of Cups reversed, but it works very well as the 3 of Swords—or the 3 of Winter—especially since both Death and the 5 of Summer demonstrate grief, disappointment, sadness and loss in this deck).

The 253-page companion book serves as a lovely tour guide of the Victorian Fairy Tarot, describing each scene, providing divination guidance, offering “in a nutshell” keywords and detailing three spreads (six, if you count the seasonal differentiations of The Herald’s Welcome spread).

I found the 8-card Dance of Happiness Spread especially revealing, making me wish that Weatherstone created even more spreads for the book!

The Victorian’s obsession with the “secret language of flowers” is renowned, so the artist’s use of 46 different flowers and plants (decoded in the Appendix by Weatherstone) add another interpretative, and visually appealing, layer to these cards.

In my estimation, the Victorian Fairy Tarot is one of the best decks to hit the market. Artist Gary A. Lippincott renders some of the most stunning watercolor art (Tarot or otherwise) I’ve ever seen (my artist husband concurs—and he’s hard to impress). With its gorgeous play of shadow and light, the sumptuous attention to detail in this deck is much more than just pretty pictures; rather, Lippincott packs a comprehensive sense of story into almost every card—giving readers and creative writers plenty of grist for the intuitive mill.

To see 18 more card images from this deck, visit the REVIEWS–DECKS section at JanetBoyer.com.