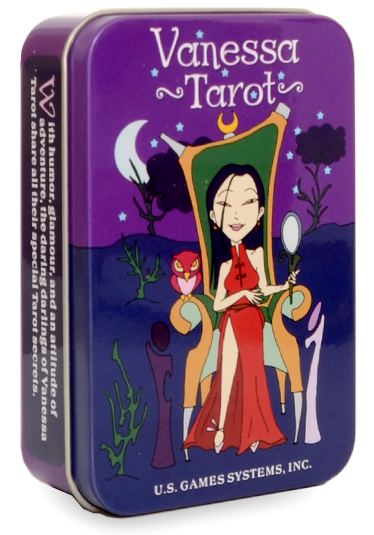 Taking their inspiration from pop culture, the sassy but sage characters of Vanessa Tarot playfully reinterpret traditional female roles. With humour, glamour, and an attitude of adventure, the daring darlings of Vanessa Tarot share all their arcane secrets.

This charming deck invites readers to join in the joy ride exploring life through the fanciful imagery of tarot. Presented in a keepsake tin, Vanessa Tarot includes 78 cards with 30-page instruction booklet.

“Vanessa Tarot has taken its inspiration from several areas of contemporary pop culture including female role models from the small and large screens of television and cinema, life-like fashion dolls, and heroines from comic books. In the same way that dolls encourage imaginative role-playing, Vanessa Tarot provides scenarios for examining our fantasies, fears, decisions, desires, and choices. The sassy but sage characters of Vanessa Tarot playfully reinterpret female roles, occupations, and social stereotypes from the housewife to the witch, and the princess to the scientist.” — Lynyrd Narciso, Introduction to Vanessa Tarot (Source: US Games Systems)

Amazon review
Danielle – June 17, 2012
5.0 out of 5 stars – Super Cute!
Format: Cards
Verified Purchase
A friend of mine got this deck and as soon as I saw it I had to have it! At the $10 price of course I purchased it without hesitation! I’ve had this deck for a year now, and although it’s not my go-to deck, I’ve certainly have had enough time to get to know this deck!

For me personally, this deck is great for getting the advice you would need from a girlfriend. It’s lighthearted and tends to give blunt and humorous answers sometimes lol. Because of this, I prefer to do smaller spreads like PPF or just a simple 1 question 3 cards, no positions. I found it best for advice so far, but I did make a pretty life-changing prediction for a friend which did end up happening (very positive outcome for her). I was even surprised by this prediction, but shows that it can definitely be serious when it needs to be! The only thing that irks me about this deck is that the entire deck is all women. There are very few men, and the men that are in the deck have more of supporting roles if that makes sense. Even the Kings are women, and I just don’t care for that. It sometimes throws me off when trying to do relationship readings.

Overall, I would definitely recommend this deck! It’s super cute, colourful, and with a bit of modernization! I wish more decks would be a little more modernized like this one! I don’t believe I would recommend this deck as a first deck, or for a newbie still learning, unless it’s just an extra added deck to play around with! I don’t think it would be an easy deck to learn from at all because it is a bit different, but it is definitely a fun deck!