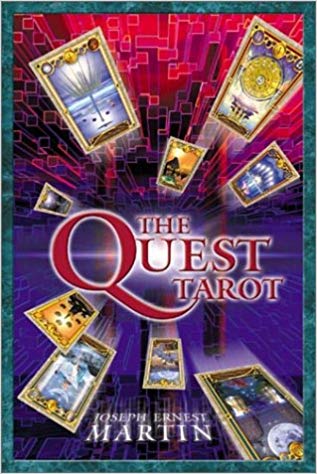 Note: This is a throw-back Tarot deck feature. I posted this on YouTube in 2015. I will update the video soon – focus on more on each card. I shall also write a review which might take a while since I will need to use the deck for a time as the basis for my review.

A Visual Feast for the Eyes, Mind, and Spirit

You’re going to love the brilliant and colourful imagery on The Quest Tarot! Its familiar design and the keywords on each card make it ideal to learn the Tarot. For more depth, you can work with the symbolism that includes the I Ching, runes, animals, Kabalah, gemstones and more.

Hidden on the court cards is an easy-to-use system that will let you quickly answer yes/no questions. The difficulty of timing in predictions is finally resolved by using a clock symbol on each card. For more information about people discussed in your readings, the cards indicate hair, eye, and skin colour. Everything is explained in the accompanying 288-page book.

The Quest Tarot can be used in so many different ways that it really can be considered a universal divination tool. The more you learn about astrology, the runes, the I Ching, and other systems, the more information you can add to your readings and the more useful this deck will become. However, if you’re like most people, discovering all of the amazing uses of this deck is just a bonus to the joy you’ll experience as you gasp in awe at the art. The deck is filled with intense colours and 3D computer realism and surrealism. The background in The Fool appears to have been cut from the Grand Canyon. Pillars around The Magician seem to be transparent light bound in place. This may be the most amazing deck you’ll ever see…or use!

doctordruidphd 5.0 out of 5 stars
Tarot Evolved Beyond the Tradition

The symbolic process is an experience in images and of images. Its beginning is almost invariably characterized by one’s getting stuck in a blind alley or in some impossible situation; and its goal is, broadly speaking, illumination or higher consciousness, by means of which the initial situation is overcome on a higher level. — C. G. Jung

The first time I saw the Quest Tarot, I immediately thought of the Voyager. First appearing in the early 1980’s, and still in print today, the Voyager Tarot was one of the first to challenge the dull and dry traditions of the Marseilles and Golden Dawn. Its vivid photocollage imagery, bold New Age themes and structural refinements redefined the possibility of what a Tarot deck could be.

Employing many of the same techniques and thematic devices as the Voyager, the Quest Tarot carries the evolution of the Tarot beyond the “traditions” to a new level. The Quest doesn’t push the Tarot envelope, it shreds it with the same delightful and joyous enthusiasm with which the Voyager left the RWS decks behind in a dusty, moldy heap. The only decks that come even close, in terms of imagery, are Ciro Marchetti’s Gilded Tarot and Tarot of Dreams; while these decks in some ways redefine the “traditional” imagery of the Golden Dawn lineage, the Quest Tarot embarks on an entirely different path. Sure, some of the traditional images are there in some of the cards, but in most cases they are only an amusing reminder of what the Tarot had been. The Fool is there with his bag and dog, but looking more awed at the possibilities that lie ahead, rather than oblivious to his own shortsightedness.

The structure of the deck differs from both traditional decks and from the Voyager, though the differences are relatively minor and of no real consequence. Most of the Major Arcana retain traditional names and order, except that “Temperance” becomes “Alchemy”, not an unusual interpretation of that card anyway, and “Judgment” becomes “Aeon”, as in the Crowley-Thoth. The Major Arcana adds a new card, The Multiverse, which in many ways symbolizes the Quest Tarot itself. The Minor Arcana suits are wands, cups, swords, and stones, and the court cards are Daughter, Son, Mother and Father, again calling to mind the Voyager’s Man, Woman, Child and Sage. Each card bears its name, along with a keyword – a feature toward which I am ambivalent, though I realize it can be immensely helpful to the novice. There is, in addition, a blank card, and some suggestions as to how the owner might use it.

What makes the Quest a totally new project from the Voyager is the variety of symbolism incorporated into the cards. The Tarot itself is symbolic by design, but in addition to the symbology of the images themselves, the cards are decorated with a variety of non-tarot symbols. The Major Arcana have symbols for: astrology, Hebrew letters, Nordic runes, and gemstone associations and influences, as well as card number and roman letters. The Minor Arcana have astrological sign and planet, gemstone associations and influences, and I Ching hexagrams, along with numbers and letters. In addition, the Aces have symbols that indicate time lines, and the court cards have symbols useful for determining yes/no answers, as well as hair, eye, and skin color. Whew! Maybe they should have called this the Swiss Army Tarot!

I should mention that all of these symbols, and their meanings and uses, are explained in detail in the “Compass” guidebook that comes with the deck. It is not my intention here to review the book, or the way in which its author interprets the cards and understands the symbols. I only mention it here to assure the student that there is no need to feel overwhelmed by the repertoire of symbology built into the deck.

This is not the first Tarot deck to incorporate a variety of symbols in its design. The Rider-Waite deck is one of the first to do so, although its use of “secret” Golden Dawn symbols merely makes the deck look silly to those outside the GD tradition (and downright wrong to some within it). Aleister Crowley incorporated just about every symbol he knew into his Thoth deck, but here again, to those not familiar with Crowley’s way of looking at things, the symbolism can be confusing in the extreme. Giorgio Tavaglione added a number of symbols to his decks, and more recently, Anna Franklin and Paul Mason incorporated a variety of Celtic symbols into their Sacred Circle Tarot.

The Quest Tarot uses these symbols in a different way. Rather than as an adjunct to the existing Tarot symbology, the Quest’s symbols are mostly intended to provide an entirely different way of reading the cards. One can consult the cards as a traditional Tarot deck, or after the fashion of an Ouija board, spelling out words, asking yes/no questions, looking for time lines, and much more. Of course one can look for similarities of meaning between the symbols on the cards, but that can become seriously confusing, and possibly inaccurate. The Runes, for example, are a totally different Oracle the the Tarot; they are based on different energies and principles, and any attempt to assign correspondences between the Runes and the Tarot falsifies one or both of the Oracles.

One does not have to draw these comparisons to use the Quest Tarot. Unlike most decks available, the Quest can be used in many different ways, and can give many different interpretations. This versatility is one feature that makes it an attractive deck for beginners, as well as for experienced readers looking for a fresh alternative to the traditional formats. Symbols, be they within the Tarot or from other systems, are images through which consciousness is enlightened, and obstacles are overcome. Like the Voyager in its time, the Quest Tarot offers a fundamentally new way of exploring the images and symbols of the ancient Oracles.