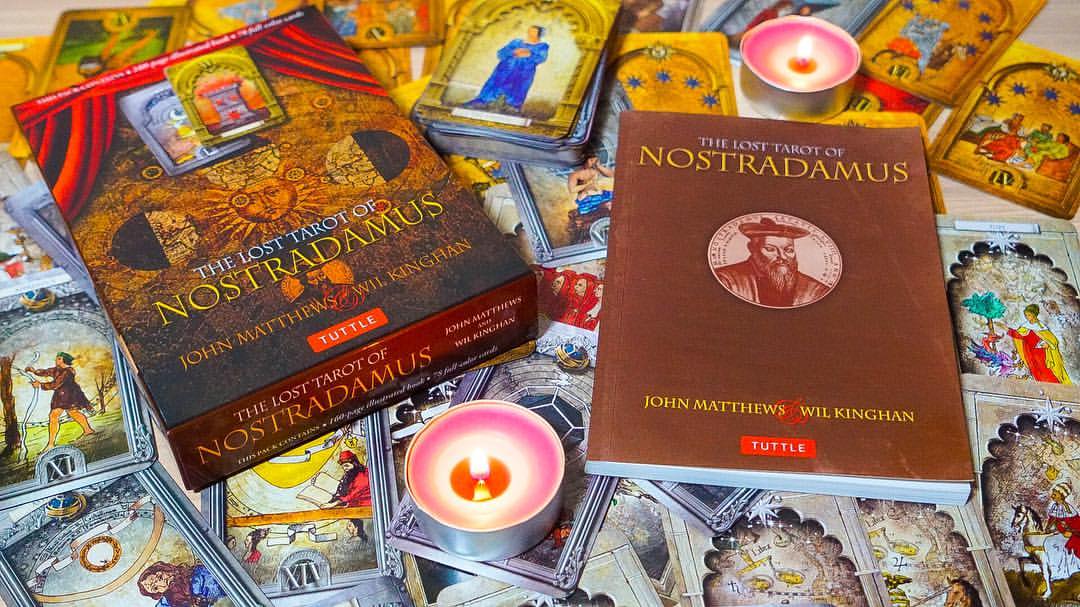 The Lost Tarot of Nostradamus by John Matthews and Wil Kinghan: a card-by-card feature by Tarot Zamm.

This pack contains 78 full-colour tarot cards as well as an illustrated instructional booklet.

In 1994 a researcher working in the Italian National Library in Rome discovered a manuscript containing 80 mysterious paintings, believed to have been devised by the mysterious prophet Michael de Nostredame, better known as Nostradamus. The manuscript, never published in his lifetime, was handed down to his son who later presented it to Pope Urban VIII. After that, it remained forgotten and neglected.

A brief glance at these extraordinary images shows how heavily they draw on the symbolism of Tarot. It is the belief of Tarot experts, Matthews and Kinghan, that Nostradamus was designing his own set of cards, drawing upon the visionary insights gleaned from his prophetic writings and visions. Now this Tarot has been brought to fruition by two modern experts and its secrets revealed for the first time.

Visionary artist Wil Kinghan and New York Times best-selling author and longtime student of Tarot, John Matthews have devised a deck which incorporates Nostradamus’ own images, fully updated to make what will surely be judged one of the most important decks of this age.

“The methodical, yet creative, the manner in which this deck was constructed gives us a tarot deck which is visually exciting, symbolically dense, and rich in esoteric wisdom from a time in which such teachings thrived. If you love tarot, this is a must-have.” —TarotWise.com blog

“The coolest thing about this deck is the story behind it! In 1994, an undiscovered volume of Nostradamus’ work was found. In it was the drawings for a Tarot deck that Nostradamus had been creating. The authors took those images and created The Lost Tarot of Nostradamus.” —The Daily Tarot Girl blog “This is a great deck for collectors. There’s nothing else out there that is quite like it. The research and dedication to the project create a great deal of depth and meaning that warrants respect and appreciation. This may not be a go-to deck for regular readings, but its mysterious energy and the information-packed guidebook are a treat for Tarot lovers and collectors. If you are looking for a Tarot that isn’t afraid to break the mould, this might be just the deck you are looking for.” —Aeclectic Tarot blog

John Matthews has produced a number of successful divinatory systems based on early spiritual beliefs—including the best selling Arthurian Tarot (with Caitlin Matthews and Miranda Gray), The Wildwood Tarot (with Mark Ryan and Will Worthington), The Green Man Tree Oracle (with Will Worthington), The Celtic Animal Oracle and Grail Tarot (with Giovanni Casselli). His book, Pirates, was No 1 in the New York Times Book Review and a best seller for 22 weeks in 2007.

Wil Kinghan is a writer, artist and explorer of the Hermetic and Celtic traditions. He studied Archeology at University College Dublin and Environmental Design at NCAD in the 1980s. He then worked in advertising and commercial art as an Art Director, winning awards for various campaigns such as for Guinness in the 1990s. He left advertising to form his own company and develop his art and writing. He recently completed work on several writing and illustration projects including The Shaman’s Oracle (Watkins, 2010) and The Ancestor Oracle (Watkins, 2011).