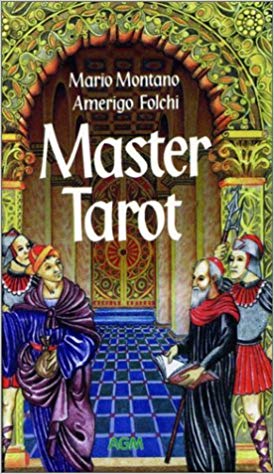 The Master Tarot by Mario Montano and Amerigo Folchi: a card-by-card feature by Tarot Zamm.

The Master Tarot leads the reader onto the path of the secret sources of self-discovery and wisdom. Episodes from the life of Jesus Christ, which are presented as spiritual truths, are shown on the cards.

The Master Tarot is a 78 card non-traditional deck displaying episodes of Jesus Christ’s life and personalities who were important to his story. The art is the creation of Amerigo Folchi, artist of the Tarocco Storico della Citta Di Ferrara.

The Master Tarot by Mario Montano and Amerigo Folchi: a card-by-card feature by Tarot Zamm.

In the accompanying LWB, the artists break with orthodoxy by declaring their love of Jesus as a “teacher,” along with Mohammed, Buddha, and others. This is sure to infuriate the crowd that swears by Lewis’ trilemma – that Jesus was either evil, insane, or he was who he said he was. Of course, the trilemma is hardly that; it’s more a quadrilemma or quintemma or whatever. Jesus could have been honestly mistaken, or more likely, we will never know what he said about himself or anything else, since the man never wrote a single word of his own. Instead, we have accounts written decades after the actual events, by people who were clearly biased and working from oral legends or lost written material. Along with quotations from the canonical Gospels, the artists provide liberal quotes from the Gospel of Thomas, one of the “sayings” Gospels by writers who recorded Jesus’ statements at the time they were spoken.

Thus, the deck is not a “Christian” Tarot at all, intended for consumption by Michele Bachmann, Rick Santorum, and their ilk. Instead, it is clearly meant to appeal to liberal Christians and secular buyers who, like the artists, and Thomas Jefferson for that matter, see Jesus as a preeminent teacher and philosopher. As an unbeliever, and as someone who isn’t particularly impressed with Jesus’ “philosophy,” it doesn’t do much for me, but others will undoubtedly see it differently. Similar to any other historical figure, we can know Jesus only through material written by or about him, and this material has to be approached historiographically. We have to understand the intentions of the writers. Who were they? What was their purpose in telling the story? Did they have a deliberate agenda, and what influence did their time and place have on them? The difference with Jesus is that believers only use the Bible as a starting point – we are often told that we can “know” Jesus in our “heart” as a living presence. This is the reality that many believers experience. However, if the New Testament did not exist, if Jesus was only known through the writings of Josephus and other non-religious sources, it’s doubtful that many people today would know who he was, beyond a historical figure who led a group of followers in ancient Israel.

The deck has no connection with the standard RWS imagery or meanings. The Major Arcana barely touch on the common themes – for example, III and IV, the “Mother” and the “Father,” could be said to correspond to the Empress and Emperor. VII, “Magdalen,” has the most tenuous association with the Chariot in that she typifies a “journey” from “Eros to unconditional love.” I suppose if you focus on the Chariot as a wheeled conveyance, it does correspond to a “journey,” but this is a complete departure from the traditional meanings of victory, willpower, and the like. The Minor Arcana depict various scenes from Jesus’ teachings, again with no RWS connection, and the Court or “People” cards depict various characters and associated lessons. Anyone attempting to use this deck for anything other than collecting should plan on starting from the beginning and learning the artists’ unique system.

Visually, the artwork is decent, nothing spectacular, and the quality is at AGMuller’s usual high level. Don’t be fooled by Amazon’s ridiculous $200 price tag; a new copy just sold on eBay for $20.