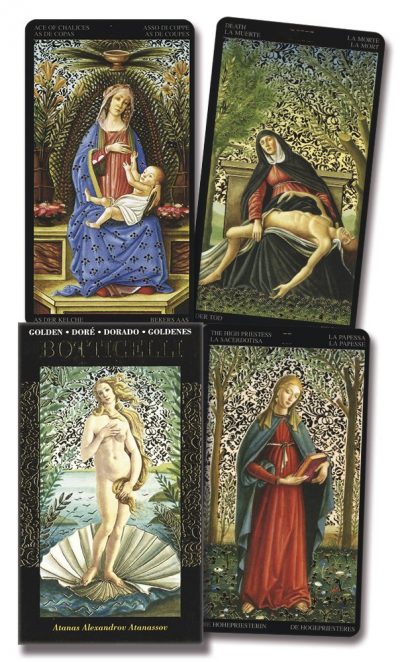 The Golden Botticelli Tarot by Atanas A. Atanasov and Lo Scarabeo: a card-by-card feature by Tarot Zamm.

The great work of this Florentine master enlivens this deck with Renaissance flair and grace. Let Botticelli’s timeless art-reproduced here with gold highlights-take you to new dimensions of nature, beauty, and spirituality.

One of Aeclectic Tarot’s Top Ten Decks for 2007!

Publisher Review: Sandro Botticelli (born Alessandro di Mariano di Vanni Filipepi in 1445 and died in 1510) had the patronage of the (in)famous Lorenzo de’ Medici, and the two works considered his masterpieces, “The Birth of Venus” and “Primavera” have become so popular that they have achieved cliché status when trying to represent Renaissance art in Florence, Italy.

Botticelli created numerous artworks, and in this deck, artist Atanassov has cleverly cut and pasted sections Botticelli’s works—sometimes duplicating images in the background (such as repeating the image of a sword to give the appropriate number of swords in a card) and sometimes changing the size (such as making the coins bigger to draw more attention to them)—and massaging them in a surprisingly effective way to produce a deck that is mostly similar in imagery to the Rider-Waite-Smith version.

Amazon review
Hope – March 30, 2012
5.0 out of 5 stars – A joy to read from!
Format: Cards
Verified Purchase
I wanted a beautiful deck. I wanted a very old looking deck. I wanted a deck that would appeal to devout Christians who wonder if they are sinning when they get a tarot reading. I was thrilled with the purchase of this deck as it has met and exceeded all of those criteria! If you like art from the Renaissance era than you will also fall in love with this deck.

The artwork for the Golden Botticelli Tarot is by Pietro Alligo and is based on the work of the Florentine painter known as Botticelli (1445-1510). The colours in the cards both front and back are rich and vibrant. The gold leaf stands out beautifully however scanned images do not give these cards justice. Readings with the Golden Botticelli gives one a feeling of richness and timelessness.

These cards look expensive and feel expensive. The Golden Botticelli has all the usual features of a Lo Scarabeo published deck. The cards are 4.7 x 2.8 and easily fit your hands and are made from the same card stock.

The deck itself is, for the most part, a Rider-Waite-Smith style deck with 78 cards consisting of 22 Major Arcana and 56 Minor Arcana. The Court cards consist of Knaves, Knights, Queens and Kings and the pip cards are fully illustrated. I’m not that familiar with early renaissance art but having looked on Wikipedia I can say that in this deck you will find renditions of masterpieces such as Primavera, the Birth of Venus and Venus and Mars.

Clients who routinely pick up my cards show much more reverence when touching this deck.

Cards with religious overtones are not unusual to find in most tarot decks, with the Hierophant being a prime example. The Golden Botticelli has many such cards some expected and others not as much. The Ace of Cups and the 4 of wands are very much Madonna and Jesus. The 9 of Cups looks much like a last supper and a monk is saying prayers over the 8 of cups. The Death card is especially poignant depicting a nun mourning a dead young man lying across her lap. Not all of the cards are so serious, for example, the Fool in the Major Arcana is contorted over in such a way he looks as if he is afraid the sky is going to fall on his head!

While reading about Botticelli on Wikipedia I was struck by the fact that he was never married and was said to have an aversion to marriage. This might be why the 3 of Swords depicts a woman walking while literally dragging an almost naked man by the hair of his head behind her; the man is praying. The 5 of Swords shows a woman walking with a sword in her hand, behind her walks another woman carrying a basket on her head, there is a man’s head in the basket!!

This is a lovely tarot deck and reading with it is a joy. I would recommend this deck to new readers and experienced readers alike.