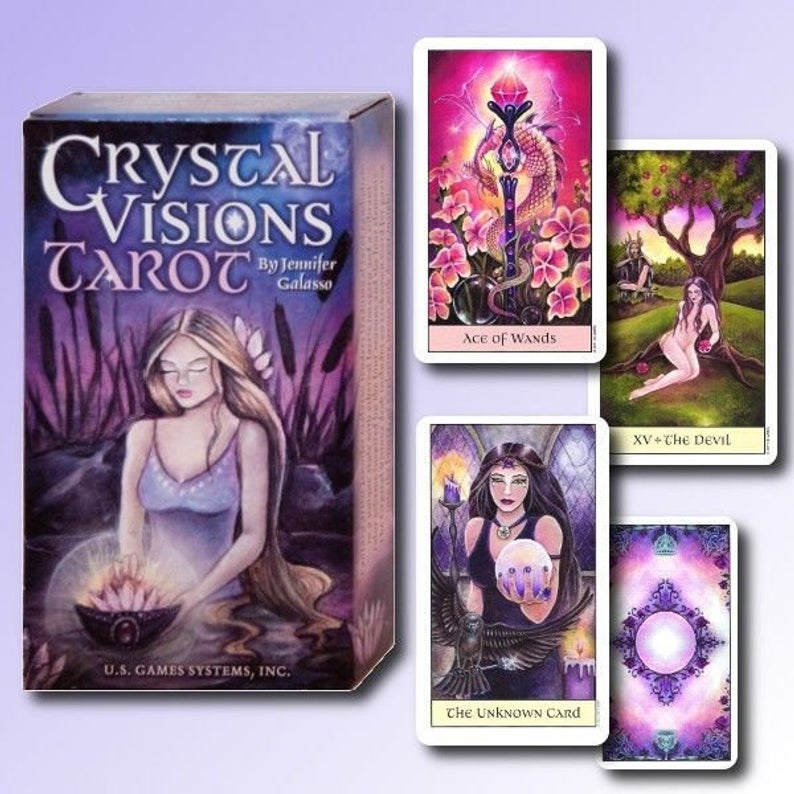 Fantasy artist Jennifer Galasso has created Crystal Visions Tarot in a unique style with ethereal faerie imagery and a vibrant colour scheme inspired by the four seasons and the four elements.

Crystal Visions Tarot remains true to the classic Rider-Waite 78-card system in much of its symbolism, as well as in card and suit names.

The luscious card imagery also illustrates the elemental aspects of each suit in order to aid the novice in forming associations with the cards.

The Crystal Visions Tarot deck includes 78 cards with an additional unknown card for gazing into future situations that have not yet been revealed, or for exploring issues with deeper insight.

The instruction booklet offers both upright and reversed meanings.

This is, hands down, my favourite deck out of the 15 or so that I have. I tend to not use it for other people because I’ve grown such a connection to it. I sleep with it under my pillow on my bed. It’s like the deck has become part of me. I consult it constantly and it’s super sassy sometimes, which I love. This deck, while beautiful, will put you in your place. She sasses me when I ask the same thing too many times and flat out refuses to answer if it’s just not time for me to know. She’s taken on my personality I think.

The tiny little guide has since fallen apart so that’s a drawback. If it had a better guide. I’d be over the moon thrilled with it. It’s in a normal tarot box which is falling apart now from use so I’ll need to migrate it to a new home soon but I love it. The images are beautiful and mystical. Bring and colourful and intuitive! The images reveal so much more than even the guide can tell you. It’s wonderful. I wish I had bought it the second I saw it, but I hesitated on the price. No regrets here, just wish I had bought it sooner.

A lovely addition to my collection. I use it more than any other deck I have.