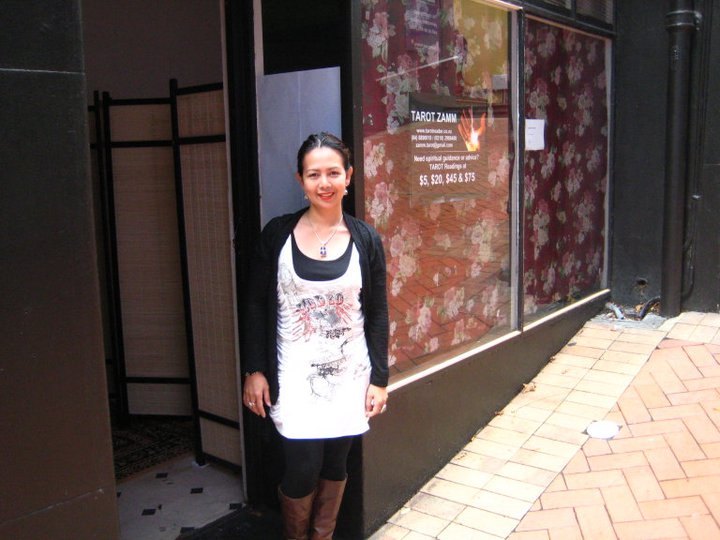 By Nutschell Windsor – reposted with permissions

“The featured shop in this story is where Tarot Zamm started. It was a tiny, dark and cold place along Plimmer Steps, but I lit it up with beautiful lamps. It worked really well in terms of the ambience. This story is written by my cousin, Nutschell Anne Windsor, also a published author and the Program Manager at UCLA Extension Writers’ Program” in Los Angeles, California.” Zamm – May 18, 2019

Zamm is one of the characters in my novel URTH.

Zamm also happens to be my real life cousin. You may have read about her in my previous post on Past life Readings.

Yes, she’s the same Zamm who gave me a Past Life Reading using her tarot cards.

Ate Zamm(Ate, pronounced Ah-te, is a Filipino term used to refer to an elder sister, or one whom you consider an elder sister),  and I grew up together in the same house, along with our other cousins. My childhood memories are fuzzy, but I’m almost sure that she baby-sat me on days when my Grandma and aunts were too busy with chores.

Although we grew up together, Ate Zamm and I never really bonded, until I had immigrated to the US and she had moved to New Zealand.  It was very strange, but in some ways the distance brought us closer together.

Thanks to Skype, and hours of conversations, we discovered that we had the same interests in business, photography, arts, language, the metaphysical and the mysterious.

Ate Zamm is the eldest cousin in my mother’s side of the family, and she’s also the most talented and the prettiest. She is amazing painter (you can see her paintings HERE)  and tarot reader, and also has the voice of an angel (she had a music album out in the Philippines way back when).

I’d like to think that because of our shared interests, we’re the most similar among all the cousins—but I certainly don’t have her beauty, my voice sounds like croak next to her soprano,  and while I can draw, my sketches are doodles compared to her paintings. Anyway, I’m just happy we’re related. J

So how did my talented cousin come to be in my book?

When I first started writing my fantasy novel URTH, I needed advice on what tarot cards would symbolize particular events in my main character’s life.  Naturally, she was the one I bugged for information.

The tarot reader in my story was supposed to appear only in one scene, but she had other ideas. She became one of the most interesting characters in my book, and as such needed an equally impressive name. Zamm was the perfect monicker, and so with my cousin’s permission, I used her name, and some of her traits, as a basis for my character.

Much like my cousin Ate Zamm, my character Zamm breaks the Psychic stereotype. There is nothing scary or contrived about her, and she certainly doesn’t read the cards and announce your impending death.  On the contrary, she is a source of information and wise advice.

Zamm the character has green frizzy hair, and she has a bit of a fondness for furry creatures (bunnies in particular). She also happens to be a druid; and she owns a shop called Z.A.P.S (short for Zamm’s Amazing Psychic Shop).

Zamm befriends the heroes of my story. She becomes an elder sister figure whom the kids look up to.  Will, Finn, and Taylor hang out at her shop all the time.  Sometimes the children help her around the shop, but most of the time they just like to eat biscuits and drink tea, and listen to Zamm’s stories. They also like to ask Zamm all sorts of random questions, and Zamm, being  a walking encyclopedia and a lover of trivia, eagerly answers them.

Although she doesn’t know that she does, Zamm helps Will, Finn and Taylor in their quest to save the Otherworld of Urth, and their own world of Earth in the process.

While it started out that art  imitated life in the form of my character Zamm, it seems that life has begun to imitate art.

When I first created Zamm the Character, my cousin Ate Zamm hadn’t yet established where she wanted to proceed with her tarot reading skills. Now, like my character, Ate Zamm has her own Tarot Shop.

If you ever find yourself in Wellington, New Zealand, be sure to check out her shop on Plimmer Place.

Her tarot readings are not only bound to amaze you, they’re also bound to give you some great insight into your own personality or the path you need to take.

Aside from the great reading, you’ll get to meet the wonderful person who inspired my one of my favorite characters in Urth.

And that’s the end of the A-Z Blogfest! It has been one crazy ride. I am thankful for all the online friends and followers I’ve made. I hope to keep you all informed and entertained in my succeeding posts.